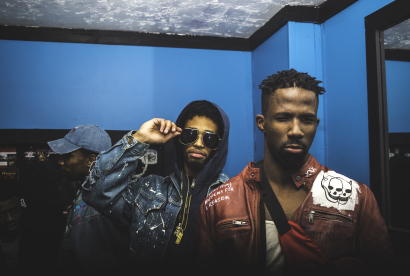 Rell Godly of SXXTHSXNSX. CEO and Founder of SXXTHSXNSX (Sixth Sense) is a young talented emcee that currently is representing the 518. Rell Godly was born in Brooklyn, NY and has lived and been to many places such as: North Carolina, South Carolina, Georgia, California, Washington, Connecticut, NYC, Hawaii, Japan, Guam, Australia, and Arizona. Rell has also served in the United States Marine Corps for 4 years right after High School. Rell has been doing music since 2010 within the genre of Hip-Hop. He has always portrayed the energy and delivery behind every rap he performs. His music is very versatile and he even dabs into a little bit of singing as well! A few of Rell Godly's influences/idols/motivations while he is pursuing his music career are: Russ, Hopsin, Drake, and Tupac. He is beginning to finalize his brand, 'Sxxth Sxnsx', aka Sixth Sense. Rell speaks on how he believes he has a Sixth Sense and that his mind is very open about a lot of things from mental conditioning to how the society takes a toll on us. Rell also is a dancer who grew up dancing and being known to dance his whole life! His passion for dancing is just as deep as creating musical art and releasing his stories all the way to his views.

A$TRX Of AMG is the CEO and founder of his music group AMG (Astronaut Music Group) . The group was formally know as S7 formed back in the year of 2010 and has evolved into a more professional group of artists , producers ,and engineer . He is the lead engineer and producer for AMG and local artist around the 518 . in 2011 he took his music career to the next level picking up a music class in high school learning the fundamentals of music and creating music . In 2012 A$TRX Graduated From Troy High School and went on to pursue his career in Audio Engineering At The New School OF Radio & Television . Since then he has been working fluently on multiple projects such as the LIFT OFF Vol. 1-3 , HGH (Haters Going Hate) , ODH (Only Drop Hits) And A collaboration Ep TOONED IN, With His younger brother U.K. Ni. Mastered His Favorite DAWs That Consist Of Logic Pro X , Pro Tools , Abelton Live 9 , Garageband and Fl Studio ,With his Melodic Synths And Sweet Sounding harmonies, his hard hitting and bouncy 808s have their own unique sound and feelings to his beats which gives people a challenge to his out of this world flows.

Concert is in Poughkeepsie, NY @ The Chance Theater! For Tickets Please Visit:

Contact Us On Instagram! @RellGodly or @Astrxthaproducer if you want to take a ride to the concert in our party bus !!

Check out the video section to see them in action for the Lil Tjay concert that was in the same venue last year!

Rell Godly and A$trx will be performing in Worcester, Ma! Come join them or tell a friend in the area!

A$TRX the Producer and Rell Godly are scheduled to touch down in NYC on February 23rd. They will be performing at the Stone Creek Bar & Lounge located @ 147 E 27th St, New York, New York.

For more information please feel free to visit their Instagrams.

A$TRX the Producer and Rell Godly performed at a HOT97 and MUSE hosted event. MUSE has these events once a month every Tuesday in NYC! A$TRX and Rell Godly will be performing in BKNY!

SXXTH SXNSX will be sending out the hats for the subscribers who signed up for Rell Godly's mailing list during his 2X2 ep release!

They will be available for purchase by contacting @RELLGODLY on Instagram directly.

#UGCS presents the second ALL-STAR Concert that Rell Godly will be attending.

A$TRX and Rell Godly performed for the ucoming NYC artist, Lil TJay. Follow these two motivated artists on their social medias to see how it went!

Once you purchase your ticket using the promo code you and a few others will be selected during the music festival by Rell Godly to each win $50! In order to make sure you are entered in the drawing contact Rell Godly on instagram @RellGodly and let him know the ticket is purchased!

Rell Godly & A$TRX the produer turned up the stage for the LIL TJAY concert!

A$TRX AND RELL GODLY were opening acts for the 'DA BABY' concert on 4/20.

Tickets and More Information
Update Required To play the media you will need to either update your browser to a recent version or update your Flash plugin.
Download Download
Back
You Tube